Our Registered Contractor Darren Castle carried out this roof cleaning and restoration project for Phil Thompson the former Liverpool football club captain, England international and Sky Sports pundit.  He called Darren to sort out the the moss that had overtaken the roof of his swimming pool building.  Darren explained the coating on the concrete tiles had worn away over the years and were now soaking up rainwater and because of this moss started to grow on his roof.  Darren's team cleaned the concrete tiles, de fungasided the roof and left it to dry out as it had been constantly damp for years as the moss had formed a canopy to protect its food supply.  A few days later they returned to coat the roof in the colour of slate grey to match the roof of the main house. 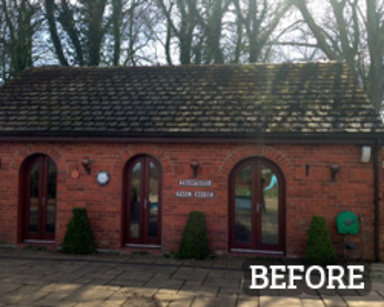 Phil told Darren that his proudest moment was as Liverpool skipper when he lifted the European Cup after a 1–0 victory over Real Madrid in the Paris final.  Darren said his proudest moment was cleaning the roof of this footballing legend! The results were stunning and a victory for roof cleaning and restoration. For people like Phil, this roof cleaning and coating has completely transformed the look of, in this case, his swimming pool building. Despite being a fairly recent build, the moss had really taken over Phil's roof, but that is no longer a problem thanks to the moss, algae and lichen biocide treatment used with this service.

Want a roof like a Liverpool FC Captain? Call us today on 0800 849 9498 to enquire and receive a FREE quote with NO obligation for roof cleaning and roof coating services. Alternatively, consider filling out our Contact Us form and get in touch with us that way so we can liaise over email to provide you with a quote.